Nothing beats a great review..

My hoop video has been reviewed on Hooping.org :D 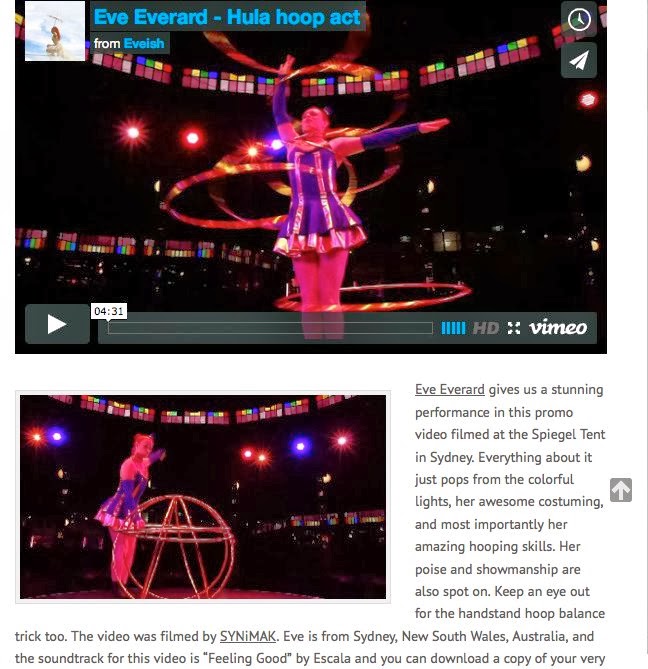 Sitting in our studio apartment, we watched our social media as people posted that they were all converging on Ireland for our favourite event of the year. The European Juggling Convention 2014﻿.

It had been a bit of a rough winter - Luke was out doing street shows and I was struggling to find the motivation to keep up with my training. For the first time in my circus life I was working a 'normal' job to pay the rent, and it was not making me a happy human.
We were still teaching the circus classes over the holiday program, but the gigs were few and too far between.

A week out from the convention something happened that most people have happen on a regular basis.. It was payday, normal job payday - A month of my wages in one single day.
So I did what any circus-obsessed individual would do, and decided to find my circus feet again.
I booked two flights, for Luke and I, to Ireland to join the other 3000 circus artists in what can only be described as the craziest, wackiest, convergence of humans on this planet. 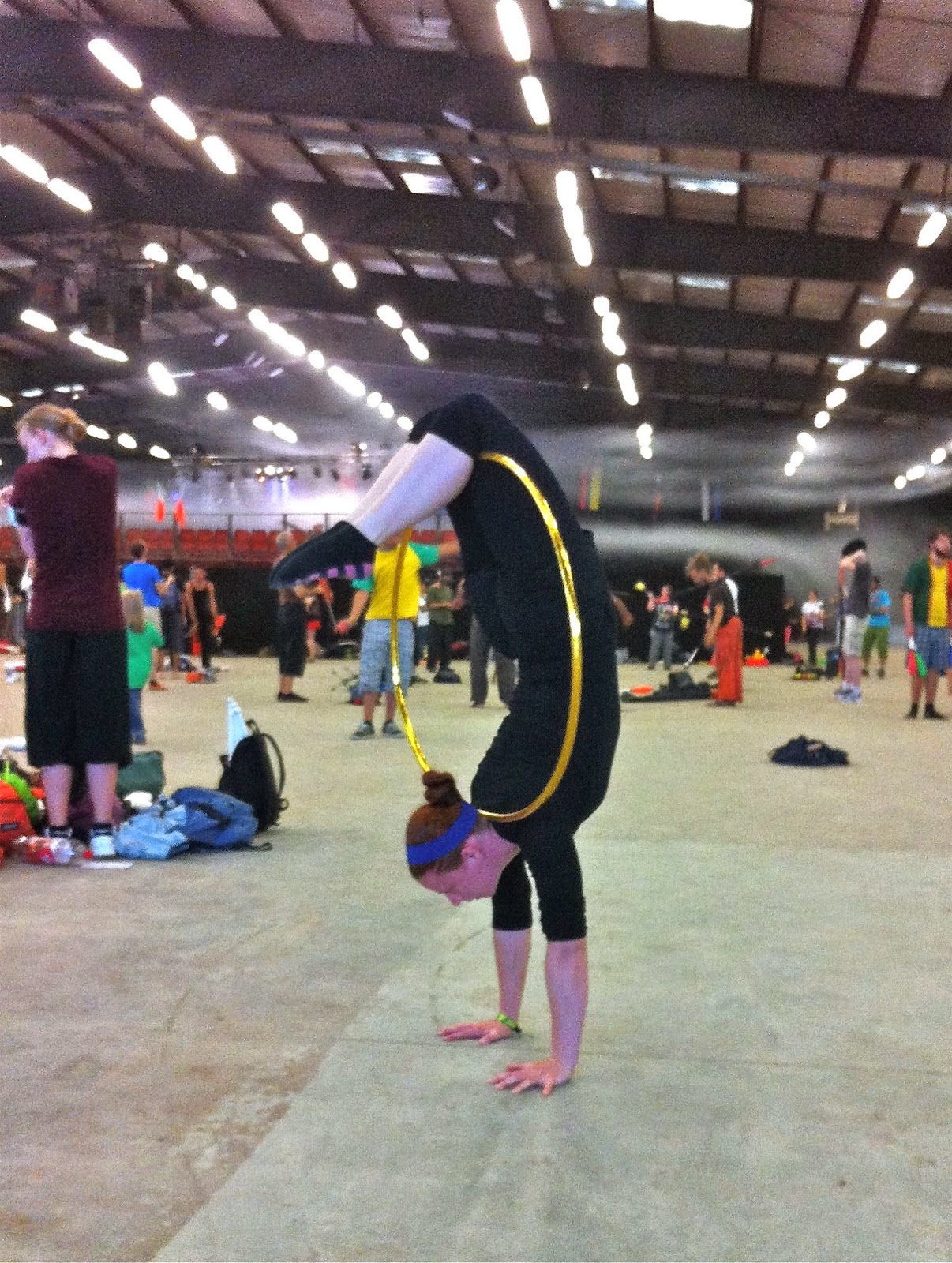 The event did not disappoint! Each day was spent in different masterclass workshops, training sessions, a 24 hour juggling hall, an acrobatic space, an aerial rig, a bunch of big tops, open stage acts, watching a show of the juggling legends (AMAZING btw) and somehow finding time for sharing tricks, and ideas with new friends and old circus classmates.. The inspiration was never ending. 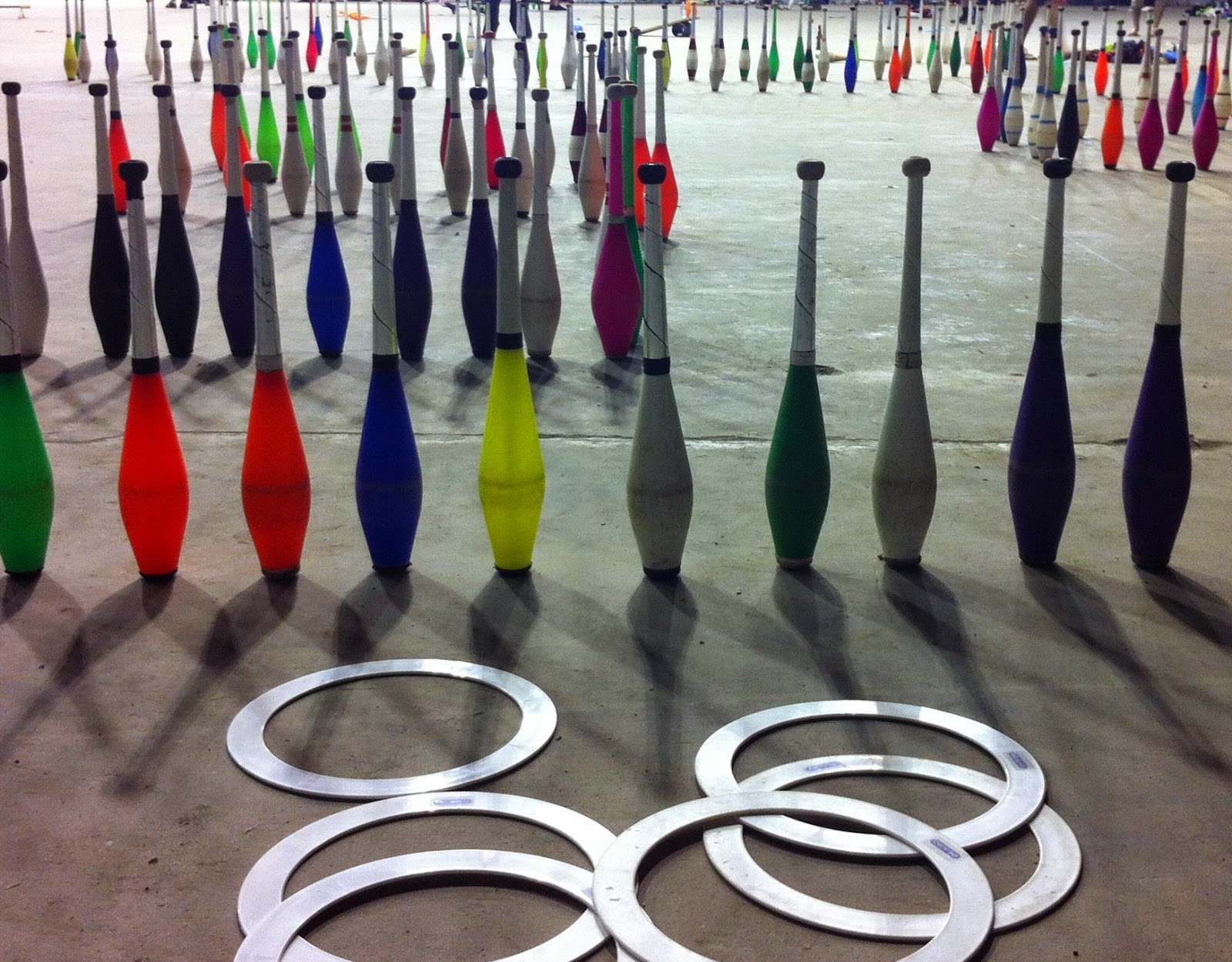 I really could rant about how incredible the adventure was, but to sum up:

51 hours of travel to get there, 6 hula hoops, 8 juggling balls, 2 travelers, 3000 artists, and 9 amazing days of circus in Millstreet, Ireland. Win. 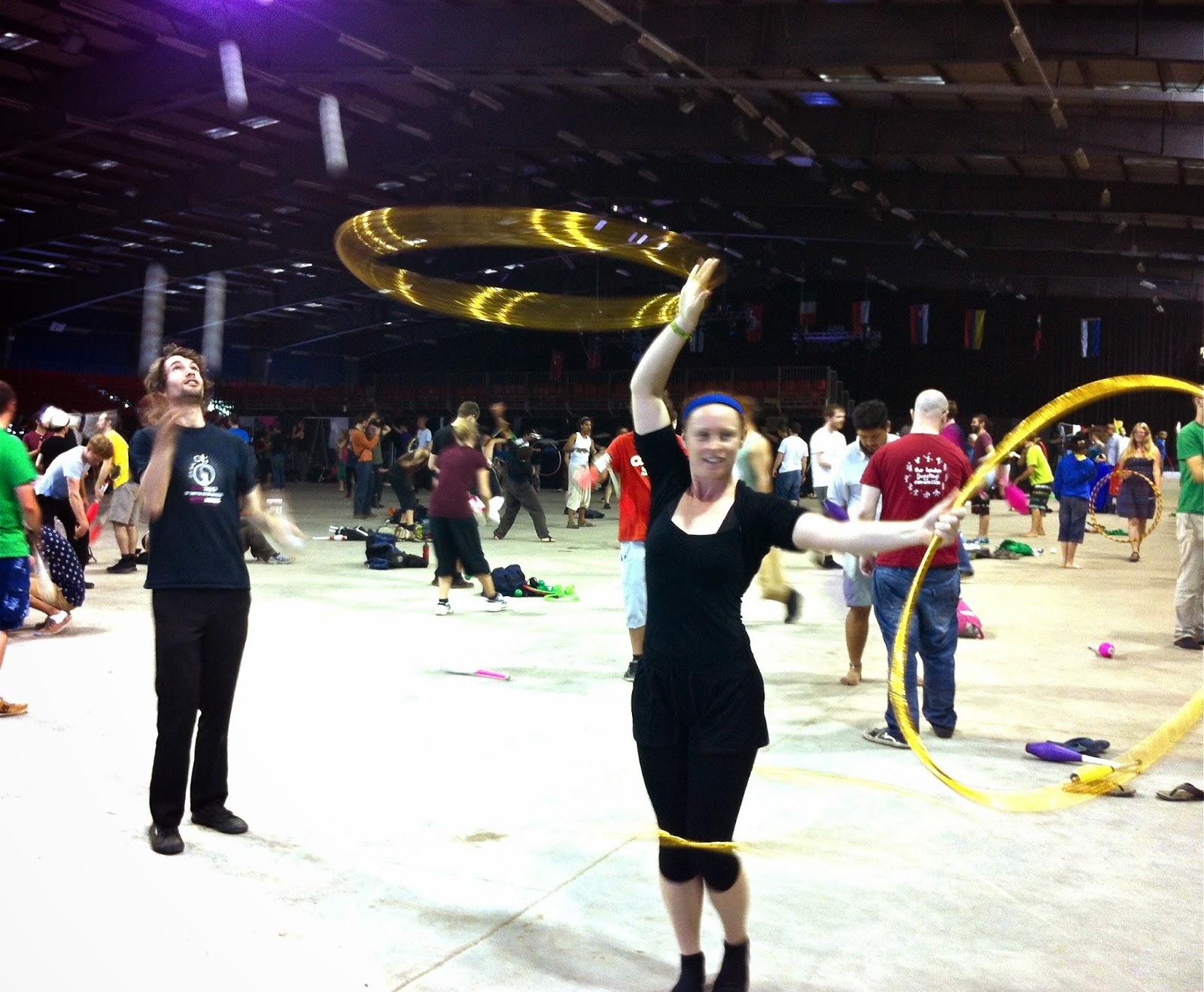 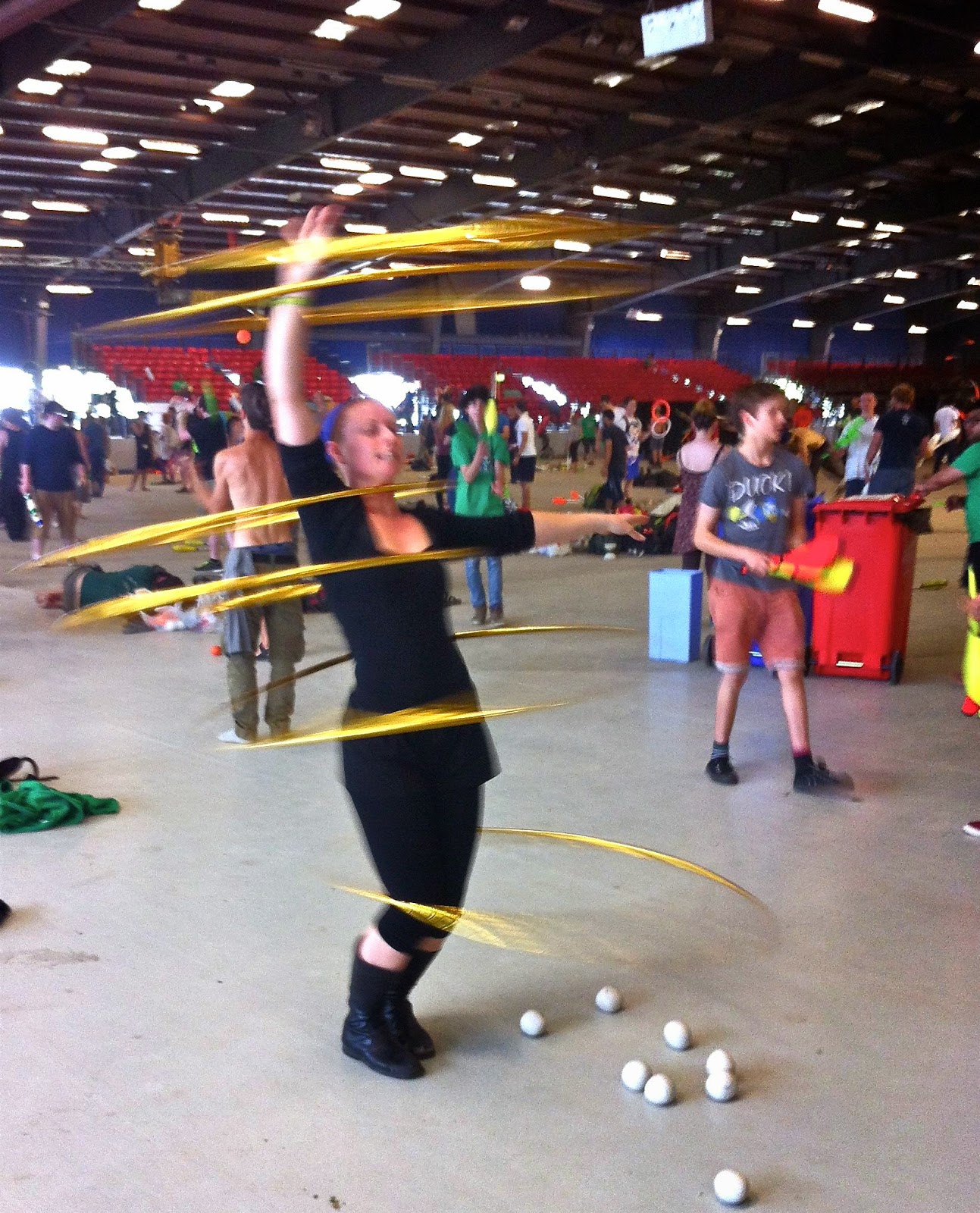 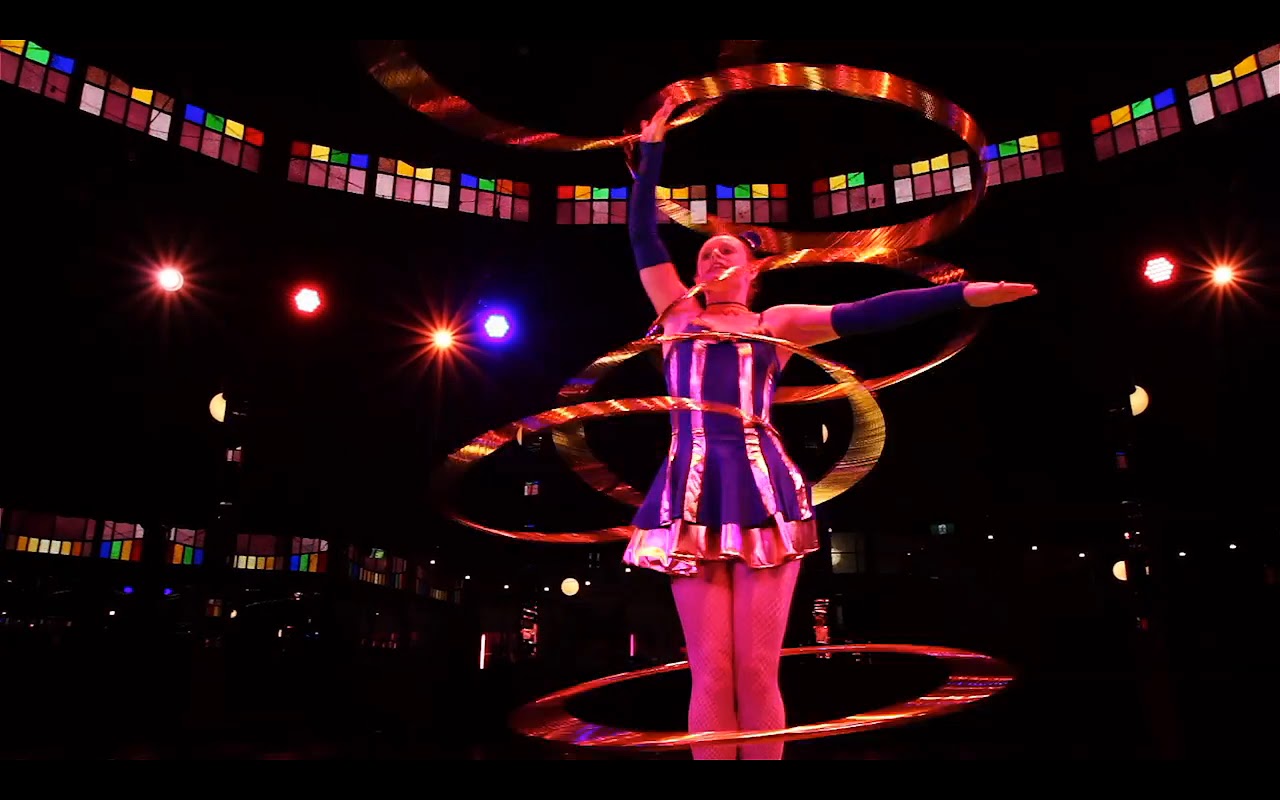 So... I have been away from the blogging for nearly 3 months. We came back to Canberra for a break after the Glastonbury tour, and took up with a Spiegel tent show that was passing through. We were not working as performers for the show, but we traveled with them to Newcastle and then on to Sydney working as ushers and helping to crew the isles.

While in Sydney I arranged with the Stage management team to shoot a new video of my hoop routine. I brought in an amazing Stunt film/TV man - SYNiMAK - who did a beautiful job putting this edit together of my routine. The full video  is up, so feel free to check it out - I'd love to hear feedback. :)
By the way.. Tomorrow we drive to Perth! (4000+ km!!)

*eve monstor claws her way out of bed and staggers towards the coffee* ahhwwyygjghkkkkk! This morning I am a pile of aching limbs and blisters, tangled in the wisps of matted hair. I got up in the middle of the night to consume a meal three times the size of anything I would normally eat. I think maybe I have lost just a little bit of conditioning since the last time I did tent :p Remind me to never take time off again! 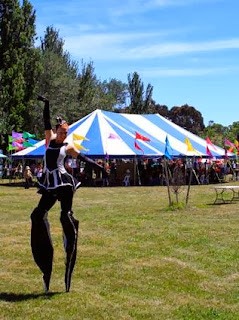 Somehow is this state of crazy aches and pains, covered in bandaids and with every part of my back strapped, I headed in to Woden Valley Festival for a four hour set on stilts. It was a perfect day for it, the storm even stayed away until after pack down.

This is our tent all decorated for the festivities, standing tall, behind me in my fav stilt costume (today with added gloves to hide the blisters!)
Posted by Eveish at 20:56 No comments:

In between stands with our new circus, we have a couple of opportunities to dust off our own tiny-top circus tent and haul her out for the enjoyment of local festivities..

This is the case today, so we are currently prepping for the first build-up of this season. The tent trailer is over-run with poppies, the flowers almost half the height of the caravan! 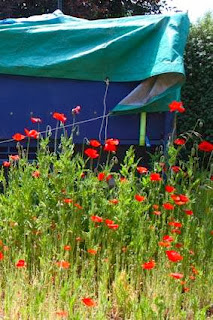 Luke and I arrived back in Australia to the unusual experience of being in a real house. My family have played Tag-team and disappeared to Paris, giving us the wonderful opportunity of house-sitting.

It is a strange thing to be able to make toast and tea at the same time without blowing out a generator. Or to be able to go to the bathroom without having to put on boots for the outside world. Or even to be able to walk in the door without unhitching the house from the car and putting stabilisers down - maybe this is a healthy break from caravan life!

Here are some pictures of our casual training sessions at our favourite park. Luke is practicing his 7 ball juggling, and I am practicing an 8-hula-hoop split.

However..
While at home, coincidentally, a circus rolled in to town..

Now most normal people might go to the show, tell their friends, and continue with their planned break from work. That really isn't our style - So we ditched the idea of a tour-free holiday and joined the circus.. We are still kind of having a break though as we are not performing in the show. We are working as front of house staff, ushering, and the occasional crew job.. That is still a break.. isn't it?


..So while we were in the area, we decided to check out the largest circus convergence in Europe - 9 days with 6000 other circus people, all playing, sharing, learning, teaching and having a ball.. Here is their official video.
Posted by Eveish at 00:18 No comments:

Eveish
Here is my travel journal of life on the road with a big top circus. I perform hula hoops, trapeze and stilts in the show.. This blog started with my arrival in New Zealand for our tour of the South Island in 2011 -this was my first ever big top experience. Now I own a little tent and with my partner we are currently setting up the next season of life on the road.. stay tuned for the short and tall of it all.

Help raise funds for the circus!